Longtime Chicago area racers will know the name Winfield from many years of racing hosted by the local Athletes By Design club. For 2021 it becomes part of the Intelligentsia Cup series with the Winfield Foundation is taking over duties as the local organizing committee, with the race part of the village’s centennial celebrations.

The Winfield Criterium and Summerfest will feature a festival experience alongside it, making for a full day for the entire family.

The course will be a modified version of previous versions, with a longer option going farther up the hill on Summit Drive, making for a tough and challenging race and living up to that street’s name!

Glen Ellyn, Winfield, and Lombard races will be run as an omnium, with collective points toward cash prizes and the coveted winner’s jersey!

Winfield will be stop #2 on the Triple Crown Omnium! 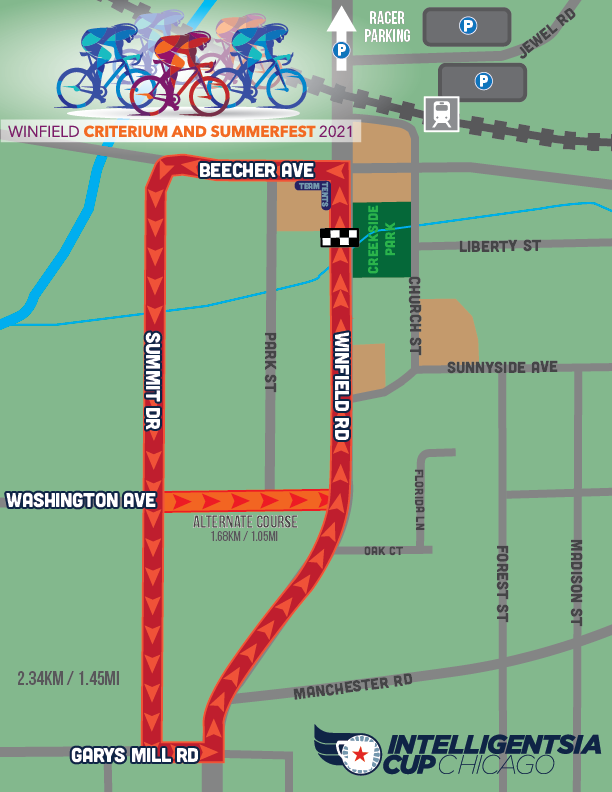 Racer parking is located north of the railroad tracks in the commuter parking lots, as well as on surface lots of Central DuPage Hospital. Please do not park on side streets adjacent to the race course to allow for impacted residents to park.

If approaching from the south from I-88 on Winfield Road, turn right at Roosevelt and then left on Forest St. to stay east of the race course. Use Sunnyside Ave to Church St. to access parking lots north of the tracks.