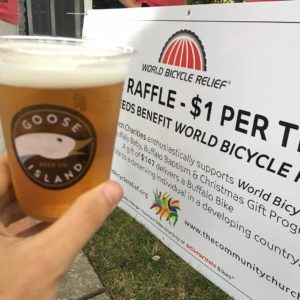 The 2018 Intelligentsia Cup powered by SRAM series, now in its seventh edition, raised enough funds to provide 28 brand new, life-changing Buffalo Bicycles to students in need in rural Africa through World Bicycle Relief, the official benefiting charity. Donations were matched dollar-for-dollar during WBR’s July campaign, and brought the total impact to 56 bicycles funded! This was done through a variety of sources, including a new option for racers to donate back their prize money won during the series, which the Intelligentsia Cup then also matched.

“The majority of riders have said they do not race for or because of the money, and we created this option for them to put that money to an alternative use with World Bicycle Relief, and even accelerated this by matching their donation dollar-for-dollar.”

Along with the prize money match, the local organizing committee of the Northwestern Medicine Lake Bluff Criterium raised an even larger amount thanks to the efforts of the Community Church of Lake Bluff, which donated proceeds of Goose Island beer sales on the day, along with a bicycle raffle.

“It was awesome to see racers step up and share their love of riding by donating,” said Mary Beth Johnson, US Partners and Fundraising Manager.

“In the US, we sometimes see the bicycle as a sport or hobby. But in the communities where WBR works, the bike is incredibly life-changing and can make a huge difference in fighting poverty. That same sense of joy and freedom we feel on our bikes is also felt with WBR’s bicycle recipients. Many thanks to the racers for their leadership and support!”